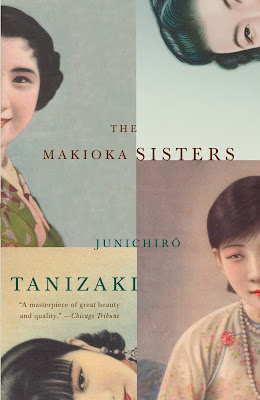 This is probably one of the most sensitively written books I have ever read. The story is set mainly in Osaka during  World War II.  However, it focuses less on current events and more on the life of one declining family in Japan during this time. The story focuses on four sisters whose parents are dead and the eldest has adopted the Makioka name, hence becoming the "head" of the household and she lives with her husband and children in Tokyo or the "main house".
The four Makioka sisters are: Tsuruko, the eldest married to Tetsuo (a bank employee); Sachiko, married to Teinosuke (an accountant); and the two unmarried sisters, Yukiko and Taeko (or Koi-San), who live with Sachiko and Teinosuke in Osaka.
As per the tradition in the country at that time, the older sister Yukiko should marry before Taeko (the youngest) and both should live at the "main house". However, both sisters live with Sachiko (second sister) who is very indulgent and more of a friend to both sisters than the eldest, Tsuruko. However, despite the main house's attempts to get Yukiko to come live there, she manages to go back to Sachiko (I really found her passive aggressive personality very interesting!). There are also numerous attempts to get her married which fail for one reason or another. Taeko, on the other hand, is an independent young woman who is trying to earn her own living and is prepared to wait for her older sister to get married before marrying her long term love. Her personality, however, is so fierce for the time that she is considered "bad" or "evil" by the main house and they make no attempt to get her to live with them.

This is such a well-written novel. The characters come to life and you feel like you know them so well - you can really empathize with each character as you follow them over four years. The book further provides such an insight in Japanese traditions and upper class Japanese family life during that period.
Extremely well written and a fantastic read