Cleopatra's Daughter by Michelle Moran
Rating: 2 out of 5 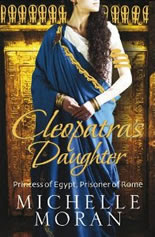 Very disappointing read for me.

It was badly written. I did not understand what is the point of inventing the Red Eagle  since he didn't achieve anything (adding a twist of mystery? why? the story has enough intrigue without it). Also, Selene is supposed to have helped design the Pantheon? I know there is such a thing as fictional licence but seriously!

There were certain sections which annoyed me and I wish the author would try to understand the Romans or at least Augustus better before providing her take on situations. For example, she attributed the fact that Princess Selene and Prince Alexander were not made slaves because they were children of a queen and not barbarians like the Gauls. Actually, they were not made slaves for the simple reason that they were ROMAN. Their father was Mark Antony; legitimate children of a Roman would not be made slaves in Rome! Augustus would not have set a bad example by making them slaves.
Also, the overwhelming sympathy for slaves from Selene was not very realistic. Selene would have been brought up in Egypt, where slaves were treated a lot worse than Rome. They couldn't even buy back their freedom and making eunuchs of slaves was common practice (something considered barbaric in Rome!) So I am not sure that Selene was this ultra evolved sympathetic modernist portrayed here. I think the author is trying to see too much in Rome through modern eyes.
Finally, I wish she would have written more on Selene's life in Mauretania rather than Rome. She accomplished so much there.

Overall, very disappointing. I wish the author would stick to fiction and keep history out of her work!!
Posted by Unknown at 08:09:00