The Malice of Fortune by Michael Ennis

The Malice of Fortune by Michael Ennis
Rating: 3.5 out of 5 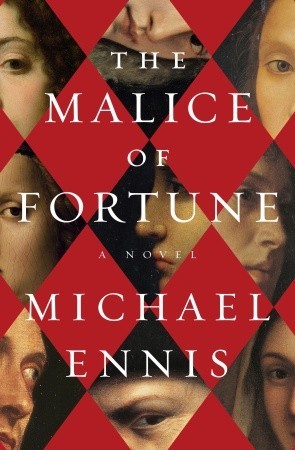 This book is unique in that it covers a period of history where 3 Renaissance Men came together; Cesare Borgia, Nicolo Machiavelli and Leonardo da Vinci. So writing about this period could not have been easy.
The book seems well researched and Machiavelli's character in particular struck me as very true to what he would have been in life. It is a mystery book with a romance element which I found dragging and extremely boring. In fact, it put me off the book. I would rather the author concentrated on the murders and making the book fast paced. Instead there are romantic scenes that drag and drag and really put me off.
I wasn't too happy about having Cesare portrayed as a serial killer but the author did present plausible reasoning ( I am very biased towards him!). However, it is conjecture and after all, fiction. a Vinci doesn't feature much in this book which is fine because I don't think the author would have been able to grasp his character.
Also seriously Machiavelli's The Prince was written as a trade off to Cesare so the world can't see what a monster he really is? I think the author was really taken in by anti-Borgia/della Rovere propaganda! No one can write such a fine piece of literature without believing in the content!
Overall, interesting story but really drags in places. Not sure I would recommend it.
Posted by Unknown at 03:09:00