The Birth Of Venus by Sarah Dunant

The Birth Of Venus by Sarah Dunant
Rating: 3.5 out of 5 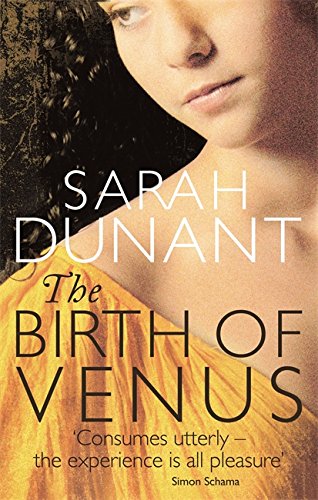 The story is set  in Florence in the 1490's just after Lorenzi Medici's death and during the rise of Girolamo Savonarola. Florence is introduced to fundamentalist Christian doctrine by the monk and his followers and the author paints a vivid picture of the resulting oppression in the city of art and culture.
Alessandra Cecchi, is the main protagonist of the story. The character and her family all come to life in renaissance Florence and the in-family rivalries, politics and drama if portrayed very well. A young painter comes into this family, commissioned by Alessandra's father to paint their chapel and he captures our young and wilful heroine's heart. Yes, it sounds very Mills & Boon but actually it's written on a backdrop of very interesting historical events (unlike Mills & Boon).

Alessandra is married off to an older man who is actually having an affair with her brother and for his part, the man assumes that their marriage is one of convenience where he gets an heir and she gets her freedom. Except that no one has informed her of the terms of their contract! All this drama is taking place while Savonarola continue to gather followers and making Florence a very fundamentalist and "moral" city where no moral crime goes unpunished, resulting in civil unrest especially among the Medici followers who were patrons of art and culture in the city

So basically its part romance and part historical. I honestly did not get the "birth of venus" reference. The book had nothing to do with Botticelli's painting. The painting was mentioned a couple of times and that's it. I thought the book will be about creation of this painting but alas it was not.  The historical detail and the renaissance life is recreated with dynamic narrative and lovely detail. I especially loved the description of the paintings.
Dunant tried to hint that the painter Alessandra had an affair with was Michelangelo. However, he couldn't have been. For one, this painter brought up in a monastery and Michelangelo was definitely not brought up there.  Other aspects of his life do not marry up with Michelangelo's either. Michelangelo's life is very well documented so this author should have either researched it carefully or not suggested that this painter was Michelangelo - it is just silly!
So not a bad book but I think she should stick to fiction, Her research is not good enough to include famous characters in her books!
Posted by Unknown at 04:46:00