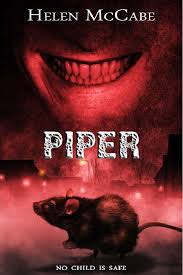 Helen McCabe's Piper is a horror adaptation of the story of the Pied Piper of Hamelin. In her story, the Piper is an immortal who rapes and murders children (I always did think the original Pied Piper was a weirdo anyways!). The novel is a gripping book and a page-turner albeit a little predictable (of course nothing will happen to the happy family in New England because the disabled child will rescue all- very Hollywood!)
The novel is split in two locations; Romania and New England. The Romanian sections show was more interesting and less Hollywoodised but there were multiple loose ends which I assume will be tackled in her next novel. The whole atmosphere of the small town of Arva was captivating and her research seems very good on Romania.
The New England bit was too Hollywood and predictable for my taste and the characters were very two-dimensional. I could not empathise with any of them. Also the New England part is soooo slow - nothing happens for a long time and it got quite boring.
I would have liked more on the Romanian part, especially the psychiatric hospital stay and how the doctors manage the situation. Delving into the minds of the New England family was very dull. I would have preferred delving into the minds of the Romanian villagers or even the Piper himself. Alas, it was not so. It started off as a good book but became run of the mill horror very quickly.
I don't think I will read the sequel - I liked use of the myth of the Pied Piper for the setting but the overall treatment of the story was very disappointing
Posted by Unknown at 08:13:00